I've just finished converting the boot space of my UK-spec 2-wheel drive Karoq SE-L trim from a space saver spare wheel to a full-size share wheel. I thought I'd put some photos here, in case anybody else is thinking of doing something similar.

When I bought our Karoq SE-L earlier this year, I wanted to order a full-size spare wheel, but it wasn't an option. The only option was a space-saver spare wheel. But I read on various forums that it's possible to fit the boot kit for a full-size spare, it just needs a bit of simple cutting of a polystyrene piece, which indeed turned out to be true. I think this is only a problem if your Karoq has the VarioFlex seats, because there is a handle on each seat which is inaccessible if you don't cut off some of this polystyrene. The UK model of SE-L trim comes with VarioFlex seats as standard, and 18" Braga style alloy wheels.

In photo number 01, you can see the original space-saver spare wheel in place.

In photo number 02, you can see the contents of the kit, laid out on my garage floor.

In photo number 03, you can see the main page of the instruction manual, showing all the different pieces.

The original boot cover needs to be unclipped. You just need to lift up the VarioFlex seats to locate some plastic clips. Twist these plastic clips then pull them out. Then pull up the material which goes underneath the seats, so you can lift out the boot cover from off the pins. You can then put back the material which goes under the seats and put the clips back in place, because the new boot cover is not held down by these pins at all.

In photo number 04, you can see the boot well with the old skinny wheel and the old boot floor removed. This photo was taken before I removed the old polystyrene insert. You can see that there is a plastic tubular piece in the centre, which stops the wheel from moving around. I thought that the kit for the full size wheel would have a taller plastic piece to support the boot floor at a higher level, due to the extra height from the full-size wheel, but it doesn't. The new kit came with exactly the same plastic part which was there already, so I just left the original one in place.

In photo number 07, you can see the polystyrene piece which sits to the right of the spare wheel. It shows a VW part number of 575 863 496 J. This is the part which holds the jack, brace, and locking wheel nut etc. in place.

There are some plastic clips which hold down the right and left polystyrene pieces ( 2 clips each). They attach to some protrusions in the metal underneath. You actually need a large Torx screwdriver to properly screw them on, but I didn't have one, so I just screwed them finger tight. From what I could see in the instruction manual, it looks like you get a tool to screw them down with the official spare wheel, but I didn't buy the official spare wheel. I bought a 2nd hand Braga alloy wheel from eBay, which is absolutely identical to the 4 other wheels.

In photo number 08, you can see my full-size 18" Braga wheel sitting in the cavity, after the polystyrene pieces have all been put in place. After I took this photo, I still had to screw down the plastic cap which goes on top of the tubular part in the centre of the wheel, to hold the wheel firmly in place. The Skoda boot kit comes with a jack and a wheel brace, which go in the right-hand polystyrene piece. The brace looked identical to the one which I already had, but the jack was very slightly different (the base of it was a slightly different width). There is space to put other tools in the cavity in the left-hand polystyrene piece, and I also put loads of other tools etc. in the cavity in the centre of the spare wheel.

In photo number 09, you can see along the rear of the VarioFlex seats , where I had to make a cutout in the polystyrene piece behind the handle of each seat. I also removed a thin slither of polystyrene along the fully length, just to stop it interfering with the seats when they are lifted up and put back down.

In photo number 10, you can see the new boot floor which comes as part of the kit. It actually has a Seat part number on it, which is 575 863 463 D CA9. It has some triangular-shaped dense foam pieces in the corners, to hold it in place correctly.

Overall, I think this Skoda boot kit for the full-size spare wheel is pretty good value. You get a lot of stuff for £77.50 + VAT. If you already have a space-saver spare wheel, you actually end up with some bits which you don't really need. For example, you'll get an additional wheel brace and jack, and an additional plastic part which screws the wheel down to the boot floor. If you're able to get the pieces individually, the ones which you really need, if you already have a space-saver spare wheel and jack etc., are the three VW polystyrene part numbers 575 863 496 A, 575 863 495 E, 575 863 496 J, plus the Seat boot floor part number 575 863 463 D CA9.

I hope that this is helpful to some people out there. 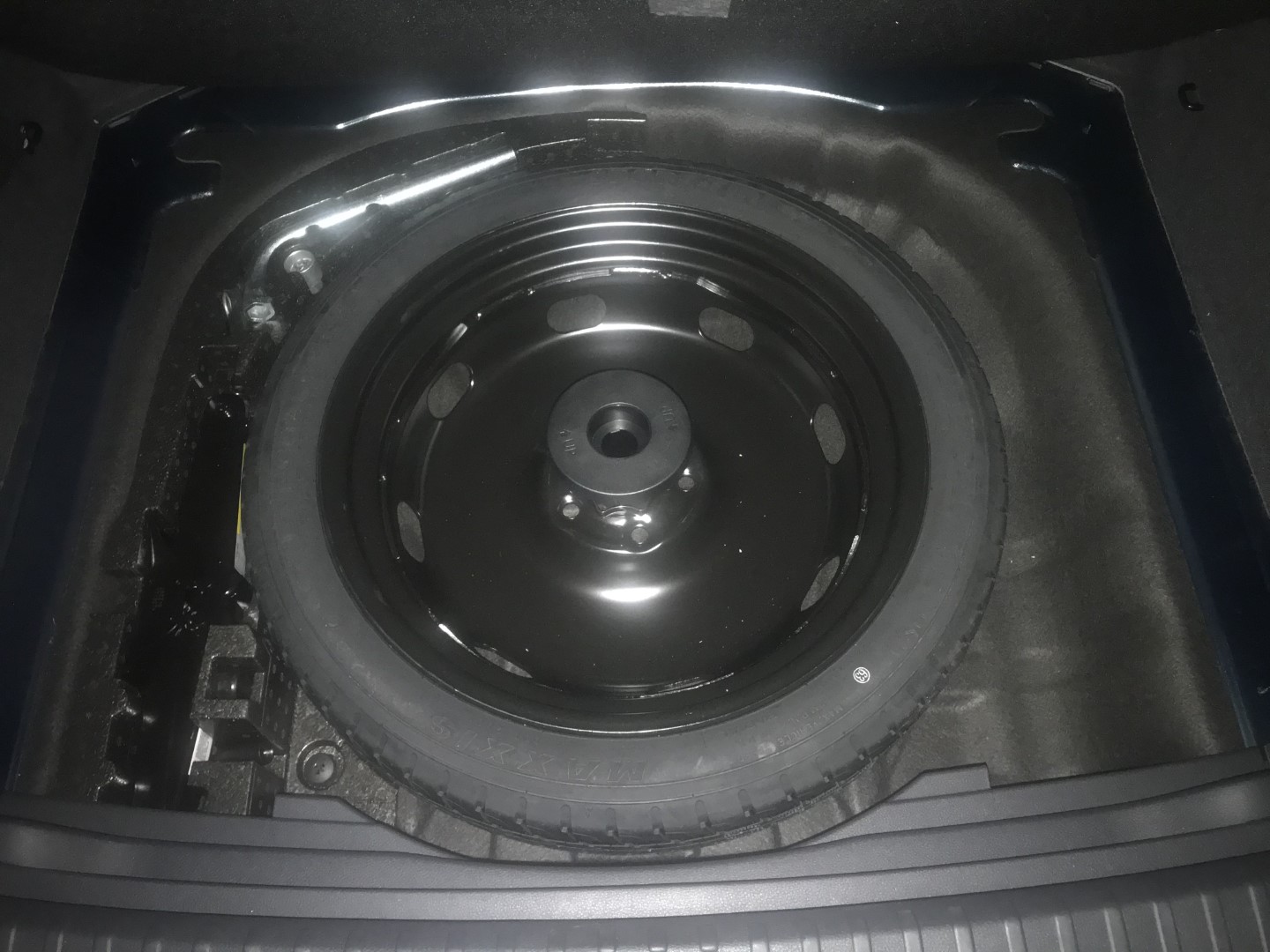 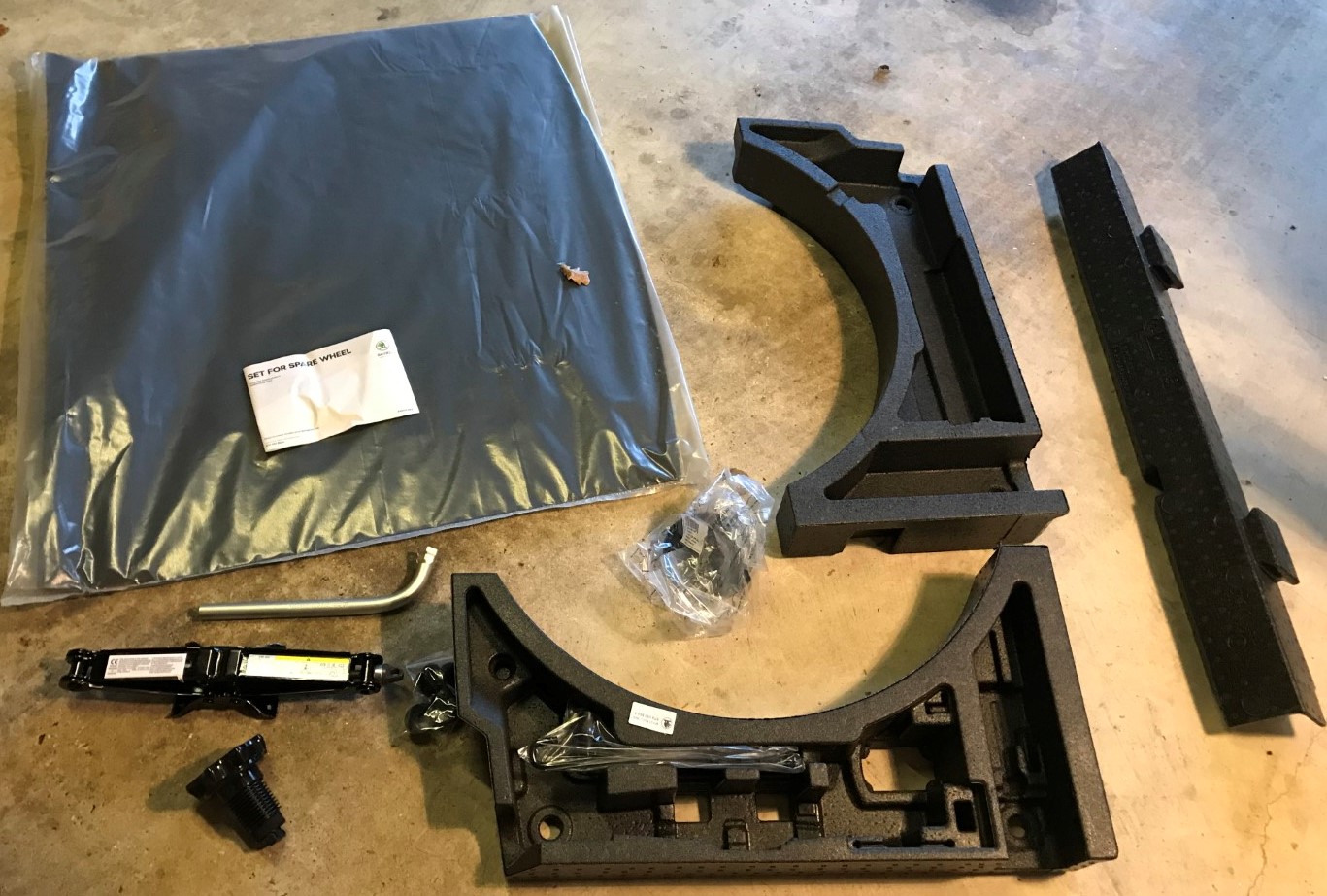 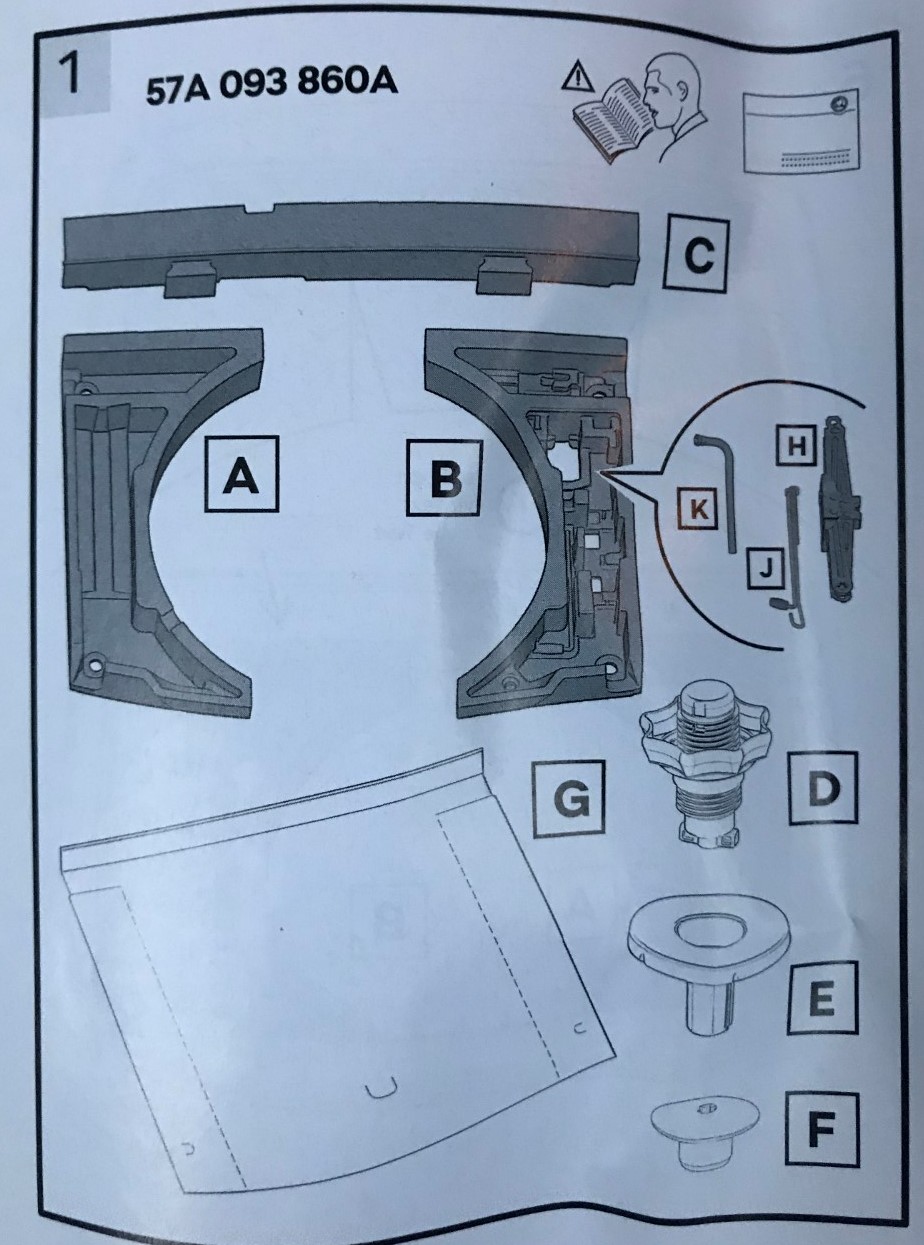 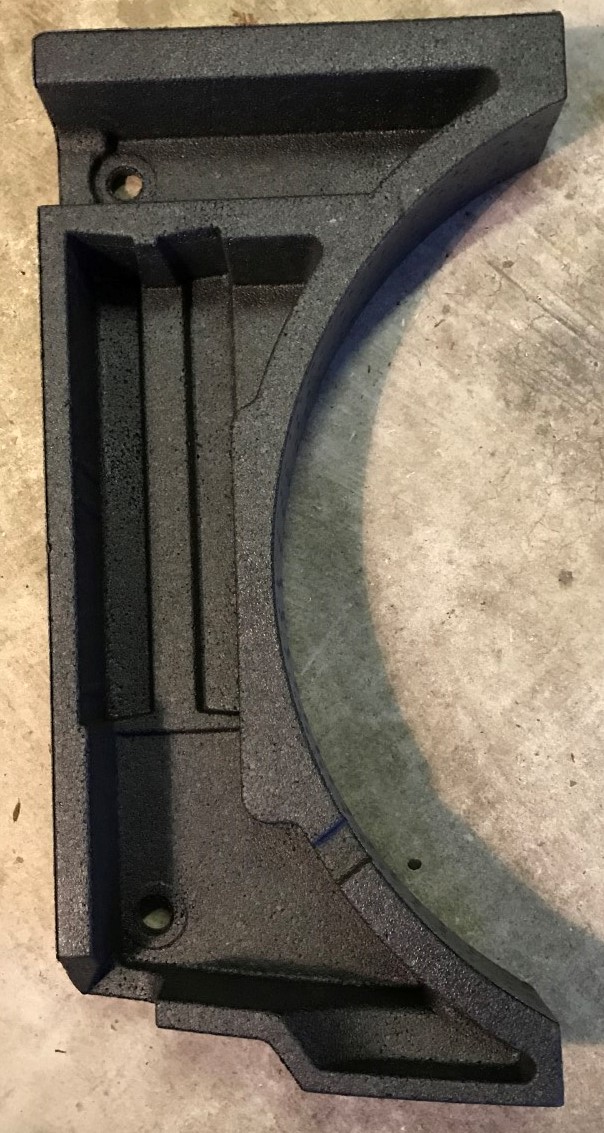 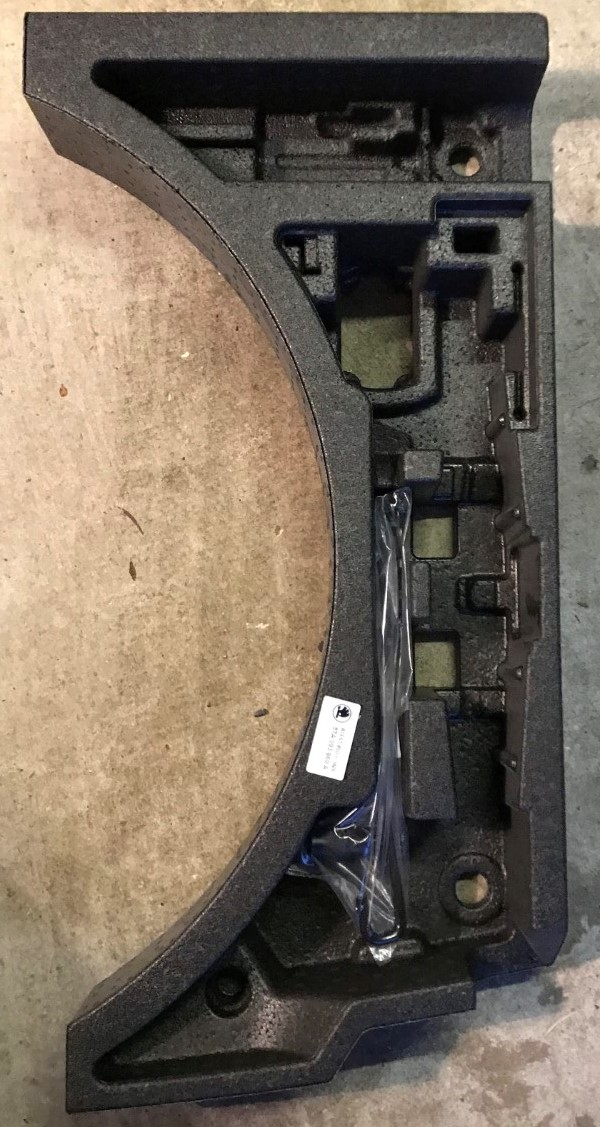 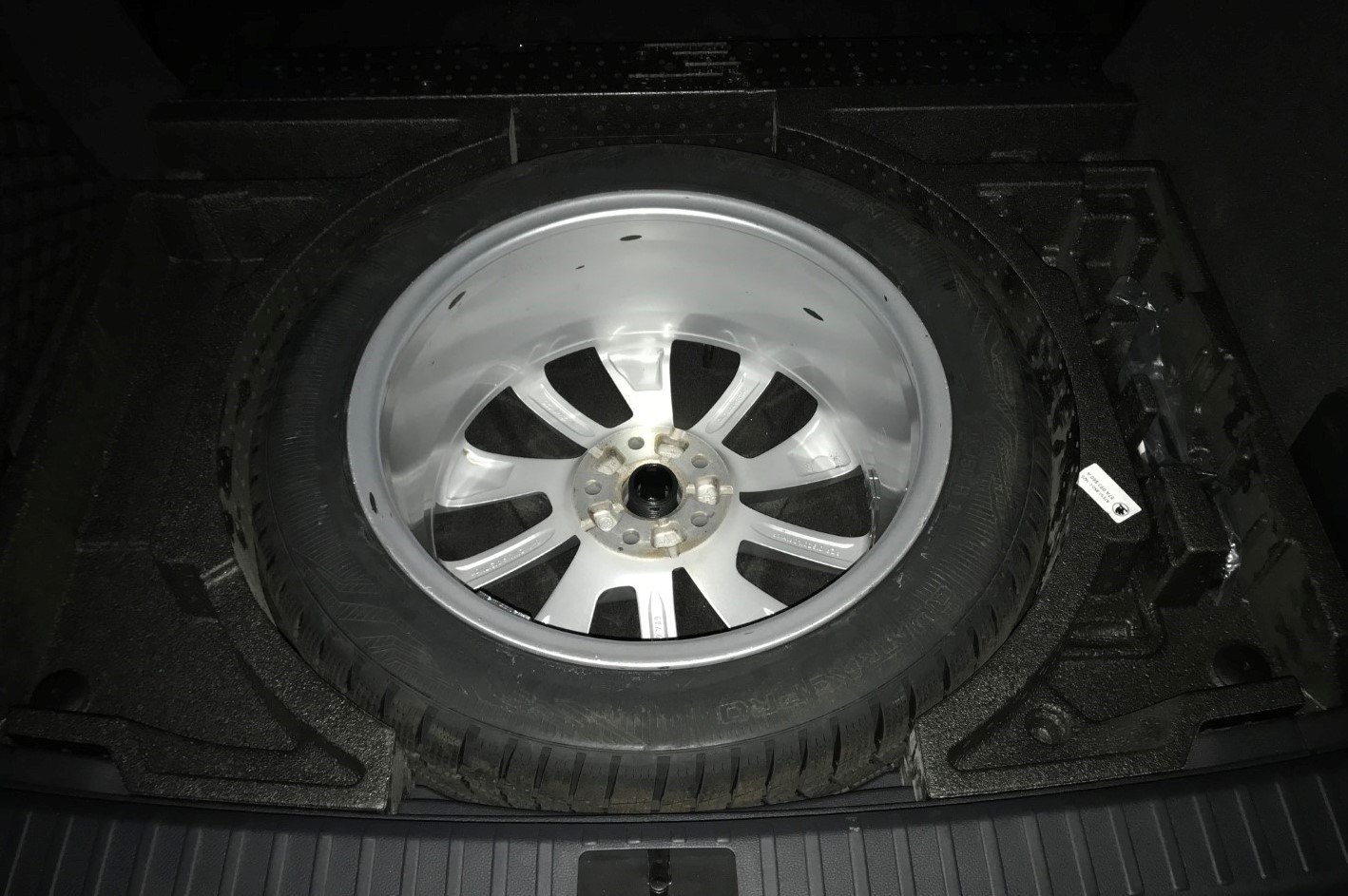 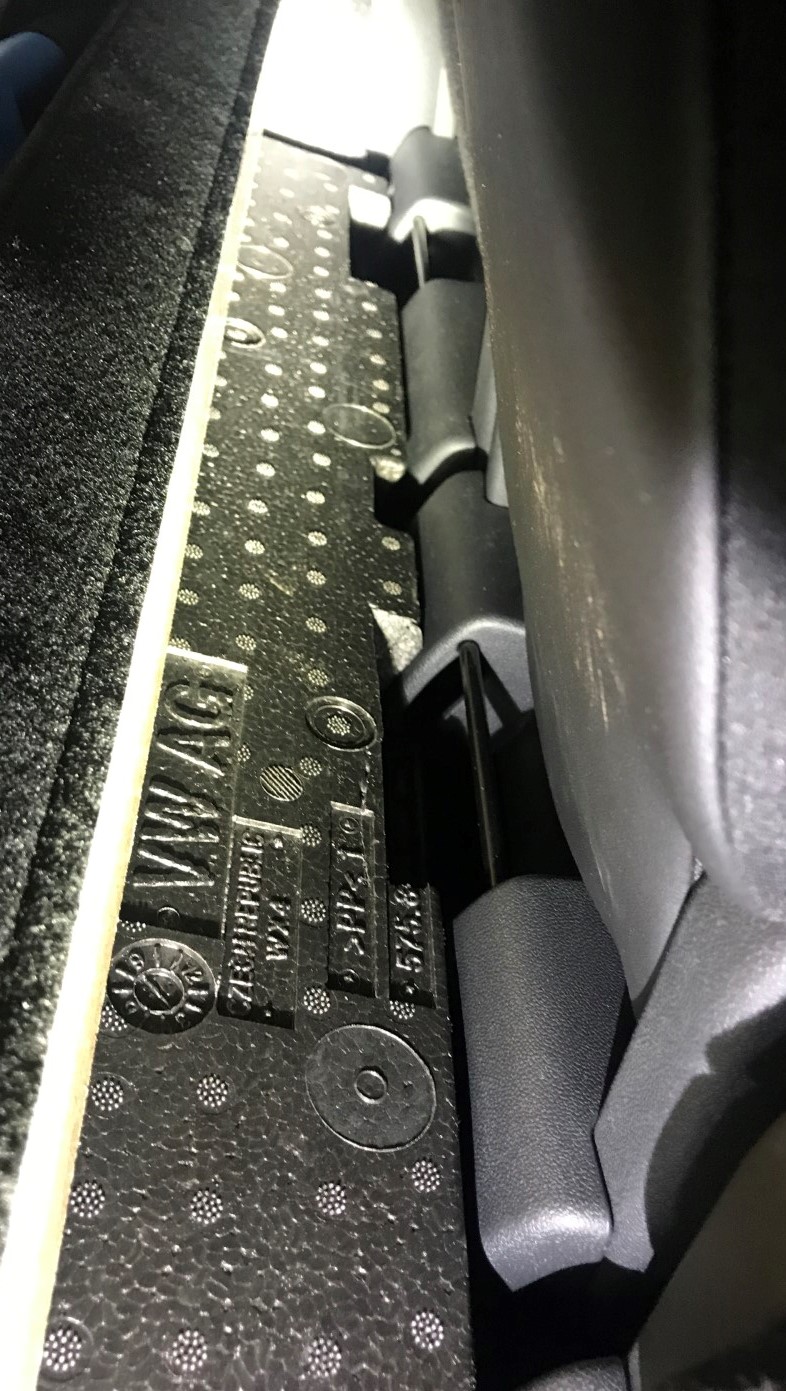 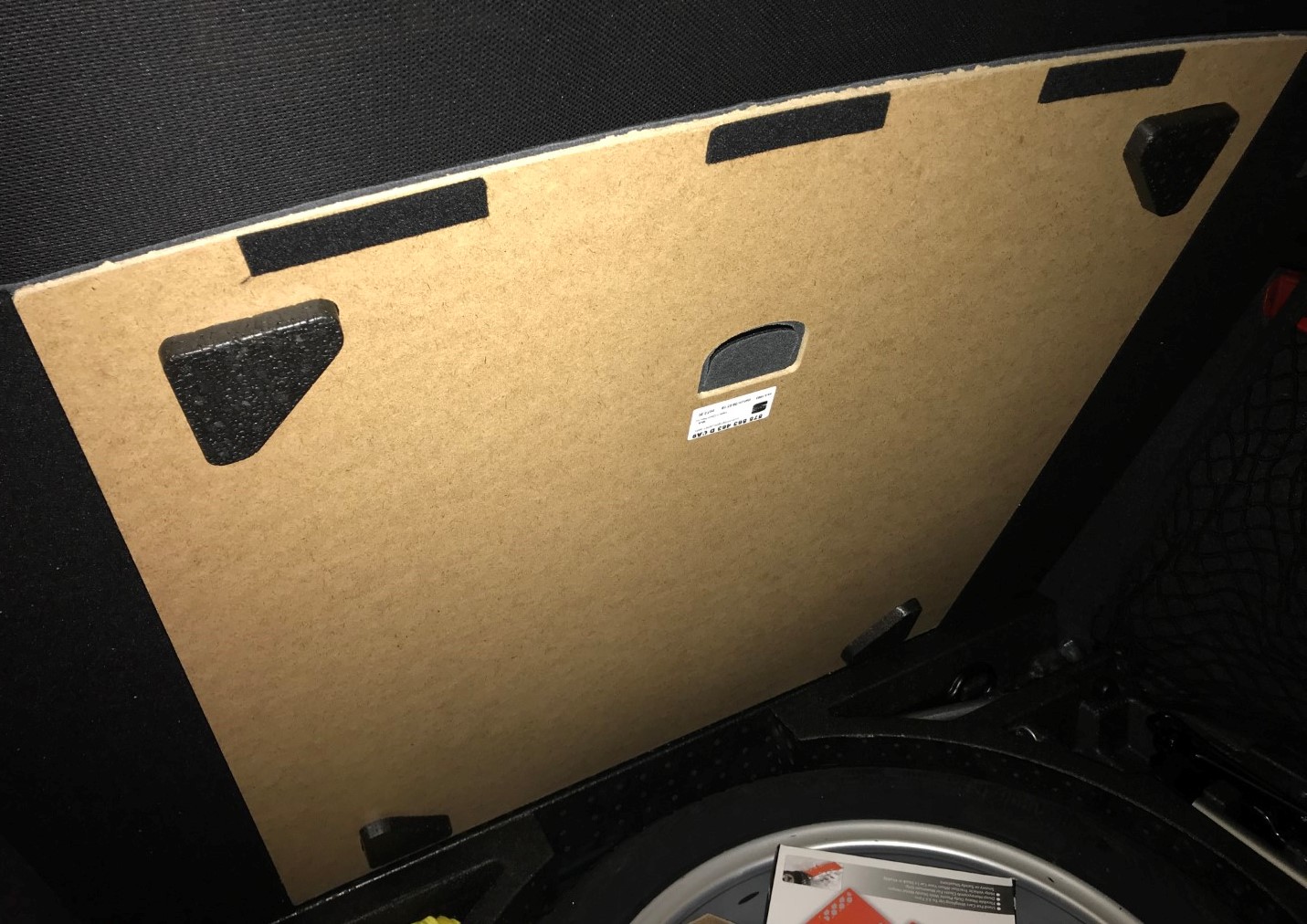 Thanks for your Article on conversion to a full-size spare wheel..well done,
I too have a Skoda Karoq SE-L 2 wheel Drive and am about to follow your scheme in converting the boot to take a full size spare wheel. I have just rung the local Skoda dealer and quoted the part number 57A 093 860A and was told it applies to the 4 wheel drive, apparently the number for a 2 wheel drive is 57A 093 860. Have you any comment?

By the way, and for the benefit of anybody else who may come across the same question, what did the other part number refer to?

If I remember correctly, I think the 4WD version uses the same wheels but with wider tyres (225/50/R18 instead of 215/50/R18) and it has a slightly shallower spare wheel well due to the space required for some kind of Haldex device for the 4WD system.

Thanx Mark for the info. I've got a 2019MY Karoq SE Technology, and have just purchased a 17" Triton alloy spare with tyre, I also have a jack & handle with wheelbrace. I am just waiting for my local dealer to open after CoViD to enable me to purchase the parts you have described. I cannot drive a car knowing in the boot is a bottle of glue and a pump.(What's that all about) I read your post with great enthusiasm to do mine.
Top

I think Space savers are a con. Brought about by the manufacturers offering a 'sop' to the 'Green Brigade'. Save fuel by having a skinny steel wheel with a skinny tyre against an alloy with a normal tyre? B*llox!
Truth be known I think it also a deal with the tyre manufacturers. as once you have used the gunge on a puncture tyre it is irreparable. This started off being a myth expounded to enable tyre centres to rush you well over £100 for new boot instead of taking £20 off you for repairing a puncture.
Also if you are unlucky enough to RIP the tyre wall, you are COMPLETELY b*ggered! beaver tail lorry rescue time! Fine while under warranty!
I'm lucky that all the (7) Skodas I have owned have either had, or been ordered with a proper spare. I drove 30k miles p.a. when I was working and never had a puncture. I have only had 4 punctures in57 years driving. Space saver? Gunge & pump?
Ne, děkuji!! (That's Czech!)
Colin Lambert. AKA, Kodiaq. Poole, Dorset.
Karoq Edition 1.5 DSG, Petrol Blue, F&R Sensors, Beige leather & Spacer saver.
Pan roof, rear camera, blind spot, lane keeping.
Diploma Auto Eng.
Moderator Karoq & Kodiaq Forums.
Top
Post Reply
12 posts